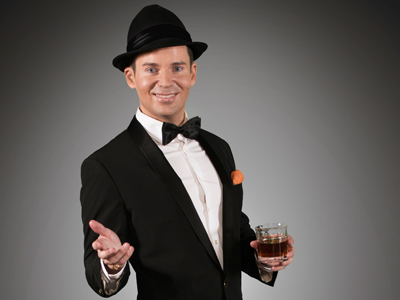 When I first started as an actor/singer performing as Frank Sinatra, I always had a goal of being endorsed by the Sinatra family. But as time went by, any show that was endorsed by Sinatra Enterprises all had one rule - no Sinatra impersonator. I believe that there is a very short list of adequate tributes to Frank Sinatra, however the family should consider looking at that opportunity much like Elvis Presley Enterprises. EPE has embraced tribute artists and have a short list of individuals who are recommended by the estate. They embraced tribute artists because 1) there is profit/money to me made and 2) it promotes and prolongs the legacy of an icon for future generations.

It's Frank Sinatra's 100th Birthday on Dec 12, 2015. I tip my fedora to guys like Bob Anderson who had the guts to do a Sinatra Tribute Show on the Las Vegas strip the right way utilizing a 32-piece orchestra and Sinatra's original arrangements/conductor. People often ask me if I thought the show would have successful if I were performing in it. It's my personal opinion that no matter who was cast as Frank, the result would have been the same. Although there will be an audience for this type of show, Las Vegas isn't necessarily the place to do it.

The billboards in Las Vegas advertise a DJ 2-1 over any show in Las Vegas. So paying a DJ $100,000 for the evening. and making 150,000 on alcohol sales that night is a win win situation for clubs. Secondly, the demographic coming to Las Vegas is changing and skewing much different than your average city in the U.S. According to LVCVA, over the past 5 years, there are 10% less retirees visiting Las Vegas and 20% less people over 40 visiting sin city. When you look at those numbers, it would be very hard to maintain numbers at a Sinatra show in Las Vegas, especially in a huge 1000+ showroom. Of the 77% of visitors who see some time of show, only 4% saw and impersonator/tribute show. In 2014 visitors spend most of their money while in Las Vegas on food and alcohol. Spending more on transportation than shows, hint hint to Uber drivers!

I'm currently peforming with Legends In Concert at the fabulous Flamingo on the Las Vegas strip. Legends features popular acts like Taylor Swift as well as established icons like Sinatra, Elvis, and MJ. The show offers variety and caters to a wider demographic. So a fan of Michael Jackson could come to the show and be converted instantly into a Frank Sinatra fan once leaving the building. That's a great opportunity for me to appeal to a wider group of people that wouldn't necessary choose to see a Sinatra or Rat Pack show. There are many choices for showgoers in Las Vegas and if there's only one tribute show to see, and that's Legends in Concert. There's no better venue to present a top tribute artist singing LIVE on stage. I'm very proud to be a part of the cast.

I will be co-hosting Valley View Live in Las Vegas on November 30th, the new daytime talk show on ABC Ch. 13! I'll be Frank for an hour and maybe sing a song or two...stay tuned.